(27 August 1813 – 11 January 1875), sometimes also known by the Croatian name of Vukić, was an officer of the Austro-Hungarian Navy who developed the first prototypes of the self-propelled torpedo.

Giovanni Luppis in his Early years

Giovanni Luppis (or Ivan Lupis) was born in the city of Rijeka (then Fiume) in 1813, which was at the time part of the Illyrian Provinces, but soon passed back to Austria. His parents were Ferdinando Carlo, nobleman of Poreč and Vis, and Giovanna Parich (Parić, Perić), noble of Republic of Dubrovnik. Because of his mixed Italian-Croatian ancestry, his family was at different times also known as Vukić, a Croatianized variant of the name Lupis (both meaning “wolf”), and he himself is occasionally referred to as Ivan Vukić, especially by Croatians.

In the city of Rijeka, Giovanni Luppis’s family has been powerful shipowners. Lupis attended a gymnasium in Rijeka and the Collegio di marina, the Austrian naval academy in Venice. Then he married a noblewoman, the Baroness Elisa de Zotti.

He served in the Venezianisch-Österreichische Kriegsmarine (after 1849 K.u.K Kriegsmarine) and rose up the ranks to the position of Frigate Captain(Fregattenkapitan). In 1848/1849 he was an officer on the ships that blocked Venice.

About the middle in the 18th century, an officer of the Austrian Marine Artillery conceived the idea of employing a small boat carrying a large charge of explosives, powered by a steam or an air engine and remotely steered by cable to be used against enemy ships. Upon his death, before he had perfected his invention or made it public, the papers of this anonymous officer came into the possession of Capt. Giovanni Luppis. 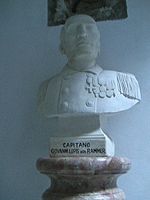 He envisioned a floating device for destroying ships that would be unmanned and controlled from land, while the explosive charges would detonate at the moment of impact. His first prototype was one metre long, had glass wings, and was controlled via long ropes from the coast. It didn’t succeed due to primitive implementation.

The second model was built with a clock mechanism as the engine for the propeller. The explosives were in the stern and were ignited through a pistol-like control, which in turn was activated through the bow, the sides or the mast. It had two rudders: one turned to the right, the other to the left, that were moved by ropes/wires from land. After numerous experiments, this design, marked ‘6 m’, finally performed well enough. He nicknamed it ‘Salvacoste’, Italian for “Coastsaver”.

In 1860, after Luppis had retired from the Navy, he managed to demonstrate the ‘6 m’ design to the emperor Franz Joseph, and it was a success, but the naval commission refused to accept it without better propulsion and control systems.