(Croatian: Faust Vrančić; Hungarian and Vernacular Latin: Verancsics Faustus) was a polymath and bishop from Šibenik, then part of the Venetian Republic and today part of Croatia.

Fausto was born in Šibenik, Venetian Dalmatia into the family of counts Vrančić (Veranzio) who came from Bosnia (a branch of which later merged with Draganić family, creating the Counts Draganić-Vrančić), a notable family of writers and Berislavić family.

As a youth, Veranzio was interested in science. Still a child, he moved to Venice, where he attended schools, and then to Padua to join the University, where he focused on law, physics, engineering and mechanics.

Veranzio’s masterwork, Machinae Novae (Venice 1615 or 1616), contained 49 large pictures depicting 56 different machines, devices, and technical concepts.
Two variants of this work exist, one with the “Declaratio” in Latin and Italian, the other with the addition of three other languages. Only a few copies survived and they often do not present a complete text in all the five languages. This book was written in Italian, Spanish, French and German. The tables represent a varied set of the projects, inventions and creations of the author. There Veranzio wrote about water and solar energy, the universal clock , several types of mills, agricultural machinery, various types of bridges in various materials, machinery for clearing the sea, a dual sedan traveling on mule, special coaches, and Homo Volans a forerunner of the parachute. His work included a portable boat , that is to say a boat that, thanks to the same energy as the current may go against the river. It was his idea to use the printing rotary principle in order to alleviate the great difficulty of printers and improve results. 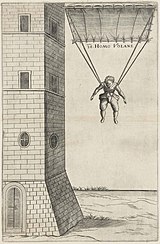 One of the illustrations in Machinae Novae is a sketch of a parachute dubbed Homo Volans (“The Flying Man”). Having examined Leonardo da Vinci’s rough sketches of a parachute, Veranzio designed a parachute of his own. Paolo Guidotti already attempted to carry out Da Vinci’s theories, ending by falling on a house roof and breaking his thigh bone (about 1590); but while Francis Godwin was writing his flying romance The Man in the Moone”, Fausto Veranzio is widely believed to have performed an actual parachute jumping experiment and, therefore, to be the first man to build and test a parachute: according to the story passed on, Veranzio, in 1617, at over sixty-five years of age, implemented his design and tested the parachute by jumping from St Mark’s Campanile in Venice. This event was documented some 30 years later in a book Mathematical Magick or, the Wonders that may be Performed by Mechanical Geometry (London, 1648) written by John Wilkins, the secretary of the Royal Society in London.

However, in his Mathematical Magick, John Wilkins wrote about flying and about his persuasion that flying would become possible. Persons jumping from high towers and methods for slowing down their fall were not his concern. His treatise does not even mention the name of Fausto Veranzio, nor does it document any jump by parachute or any event at all in 1617. No evidence has ever been found that anybody ever tested Veranzio’s parachute.

His areas of interest in engineering and mechanics were broad. Mills were one of his main point of research, where he created 18 different designs. He envisioned windmills with both vertical and horizontal axes, with different wing constructions to improve their efficiency. The idea of a mill powered by tides incorporated accumulation pools filled with water by the high tide and emptied when the tide ebbed, simply using gravity; the concept has just recently been engineered and used. The first wind turbines were described by Fausto Veranzio. In his book Machinae Novae (1595) he described vertical axis wind turbines with curved or V-shaped blades.

Urbanist and engineer in Rome and Venice

By order of the Pope, he spent two years in Rome where he envisioned and made projects needed for regulating rivers, since Rome was often flooded by the Tiber river. He also tackled the problem of the wells and water supply of Venice, which is surrounded by sea. Devices to register the time using water, fire, or other methods were envisioned and materialized. His own sun clock was effective in reading the time, date, and month, but functioned only in the middle of the day.

The construction method of building metal bridges and the mechanics of the forces in the area of statics were also part of his research. He drew proposals which predated the actual construction of modern suspension bridges and cable-stayed bridges by over two centuries. The last area was described when further developed in a separate book by mathematician Simon de Bruges (Simon Stevin) in 1586. Veranzio also designed the concept to modern tied-arch bridges, through arch bridges, truss bridges and aerial lifts.